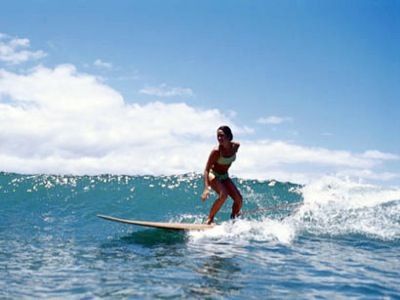 No, I don’t look like this surfer chick. I don’t even surf. But I was a lifeguard! (Does that count?) I loved it so much I even studied for a degree in recreation management, and wanted to run an aquatic facility as my career.

One awful day I realized I was finding it harder and harder just to do fun stuff. And then I started falling asleep in class. It even got hard to go for walks. But things got ridiculous the day I couldn’t stand in line at the bank without feeling like I was going to collapse, and sat on the floor until it was my turn.

I coughed constantly, caught every bug that flew past my neighborhood, grew bigger and bigger, and felt weaker and weaker. Even my hormones went on strike. (What’s with that? I get to go through THAT… AGAIN?! *$%!) In fact, my 80 year-old father was stronger than me, even with his congestive heart troubles. Crazy. Good for him. Awful for me.

Anyway, one day I pinched some Cheesies at my son’s birthday party, and after starting to wonder what on earth “They’d” done to the Cheesies (whoever “They” is), I nearly passed out. Days later I was diagnosed with severe multiple allergies to food. Normal, everyday food. Normal stuff. Like… Popcorn. Cheese. Milk. Toast. Nachos. Pizza. Kraft Dinner. And yes, Cheesies.

And so my journey began.

Welcome to the beginning of Life After Corn.