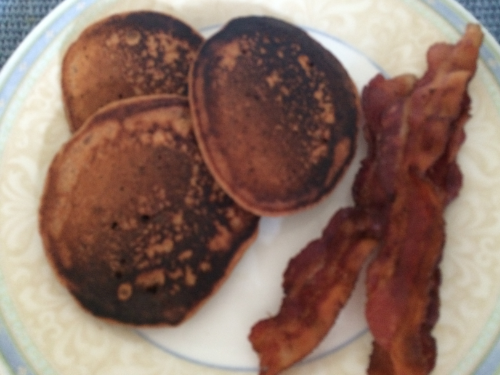 The Holy Grail of great gluten-free, egg-free, dairy-free, almond-free, and corn-free breakfasts must be the Perfect Pancake Recipe. Or so I think, given how many people – including myself – have made attempts at some variation of recipes that incorporate these restrictions.

So, after years of muddling about with less-than-stellar versions, I’m trying a whole bunch of them out, and then constructing my own recipe based on the ideas I do and don’t like from each.

Here are some of the ones I’ve tried:

Here are some I looked at and didn’t try, and why:

Here’s what I think about each one I did try, based on my own cooking efforts:

And the winner is…

For me, the showdown comes down to Momable’s and Fitchen’s recipes. I think I’m going to try a blending of the two to see if I can find that elusive nexus between great texture and great taste! When I find the winning mix, I’ll post the recipe.