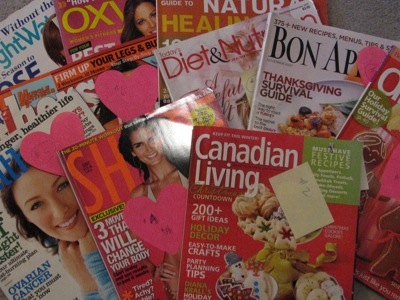 December, 2007: The height of the annual socializing-over-food season.

792: The number of posts, during December 2007 alone, in a forum for people struggling – or, in some wonderful cases, thriving – with celiac disease.

10: The number of magazines (December 2007 issues) I reviewed, all focused on some element of food, health, family, diet control, and fitness.

1: The number of nerds that read all this crazy stuff. Wait… that’s me… (OK, OK, now my friends are all snickering… maybe I’m not actually smart enough to be a nerd – but I’d like to be! LOL!)

I was curious to see if the the interests and issues the online forum members, real people who struggle with a serious food-related issue, were discussing together was matched by the information provided by mainstream media about the social side of keeping a special diet.

So, I counted comments about food, with the exception of recipes, tagging them as “technical” (e.g. “make every calorie count,” Shape, p. 56) or “informative” (e.g. “do one small change at a time,” Diabetic Living, p. 20) versus “social” (gheidi (go to Post #4), discussed here) or “symbolic” (e.g. Christmas turkey, discussed here).

The difference was pretty amazing. At least, it was to me.

The folks in the gluten-free forum discussed social issues relating to their special diet in about 20% of the posts. One hot topic was how participants struggled to overcome a mixed-bag of emotions, ranging from bemused to sad to angry to offended, over wheat-filled gifts received from friends, co-workers, and family, folks in that person’s inner social circle who were aware of the recipient’s condition (zarfkitty).

Out of ten magazines, while some came close, only four comments could clearly be tagged as purely addressing social issues relating to special diets. All four of them were presented in Canadian Living, family life magazine. For example, Canadian Living suggested gift ideas for folks on special diets, such as a gluten-free cookbook, a subscription to Allergic Living magazine, and fun, sugar-free foods for a diabetic friend (p. 96).

Clearly, coping with social issues that arise because of a special diet is a much bigger struggle for the “Wonderful Food (Just Different)” Tribe than the folks who write magazines have discovered…